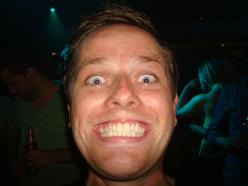 With the season due to kick off in only a few weeks it is almost time to wish Tom and Sarah ‘Bon Voyage’ as they prepare to head off Down Under next week for the next two years!

Not only will we have to do without our short stop extraordinaire, we will also miss the King of Banter with classic lines such as “all the gear and no idea” as well as our entire ‘creative art’ team.

Since Tom arrived for the third game of the 2009 season and played short stop the Pirates began the transformation from newbies into an organised team to be reckoned with. Whilst no stats were kept for the opening season if they were Tom would have been at the top, belting out one home run after another.

His good form continued through 2010 and into 2011 (see below) as did his banter and showmanship- remember the home run cartwheel celebration against the Loan Wolves? Whilst we will all be sad to see Tom go that won’t be the case for the some of the opposition teams especially our favour misery team- The Moanadoes, who no doubt remember Tom charging them down and picking up a triple play.

Whoever takes his position will have big shoes to fill…..

Tom doing what he does best- whacking!

Pirates vs ThundercatsAugust 8, 2019
Thundercats are noooooo

Buccs vs KnightsAugust 14, 2019
Not even Sir Lancelot will save the Knights...