Add a double birthday (Laura/Phil) and upcoming wedding (Marines), some warm humid weather, a lot of beers, Jaeger on demand and the Comets/Diamonds/Pirates combo and the result was one very laid back game of softball.

As Lucy was awol and Sohan away we once again played a 5-5 combo with Mikey and Phil coming on as subs for Bola and Shorty in the 4th.

The game got off to a great start as despite Dave’s best efforts to walk the girls (JJ and Tom) we were able to hold them to zero runs. Shorty also had a cracking start with a huge hit, not only sending the ball into the stratosphere but pushing his stats up there too. Sadly that’s where the innings ended after Nads and Chris was unexpectedly caught out and Shaz was just short on her run to first.

Back to defence time which is exactly how we played it by limiting the Comets to just the single run, with Laura making some great stops on third base and Chris and Paul combining for the 6-3 plays. The 2nd innings fared much better with Bola leading off and then showing the Comets how to squeeeeeze following a great hit from Paul. Shorty picked up the 3rd run, Nads made first before Chris blasted one to the outfield but unfortunately was caught.

A booze induced lapse in concentration saw us fail to score in the 3rd though it has to be said that It was a harsh decision to call Player out running to first. Where’s the video replay when you need one?? Lucky for us the Comet’s were having their own wobble, also failing to score as a result of some great infield defensive play.

Back to scoring again courtesy of Paul and Laura who punished JJ for standing in way too close. Naturally Laura smashed it over her head, sending Paul home before Chris added to his home run tally with a low ground ball to left field aimed at poor JJ. Once again the Comets stalled and failed to score a run as the balance of the game tipped towards the Pirates.

9-2 at the top of the 5th as Mikey came on as short stop and Chris retired to the outfield, taking a big catch as he did so. A mini rally thanks to a nice homer from the Comets saw them pick up a couple of runs before their revival was snuffed out by Mikey-Paul combos. Another couple of runs in the 5th from Dave and Mikey followed by a couple of walks (Player and Laura) saw Mr 1000 aka Phil step up to the plate with bases loaded AND his missus watching the game. Ooooh such pressure but of course Phil being Phil shrugged it off, left the first ball (strike), left the second ball (strike) and then absolutely smashed the next ball. Shame that it actually went backwards as did Phil’s stats at that exact moment.

The 6th saw the Comets were able to pick up a couple of runs but us pick up another couple of runs as did the Pirates thanks mainly to some fast running from Jade and forcing the errors. Shaz picked up her RBI with a charge to first base allowing Dave to sneak home before Mikey and Sarah were taken out with throws to first base.

Enter the 7th  and cue ‘Enter the Sandman’ with Chris coming in to pitch out the final innings. Captain Chris struck out the first two batters before allowing Mikey to pitch to JJ. Needless to say that resulted in a walk (her third) before Chris picked off their last batter with a nice throw to Paul on 1st.

MVP: ummmmm the entire Comets team for outdrinking, out singing  us and general Pirateness behaviour

Weird play of the day: Weird Steve eating a £10 note and spitting it out 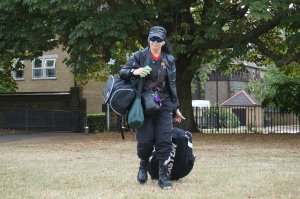 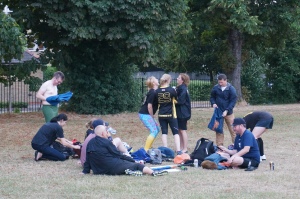